International Edition
Amidst the global push for decarbonisation, the climate impacts of natural gas are coming into the spotlight. Although marketed as cleaner than coal, natural gas is highly emissions-intensive on a life-cycle basis. The international scientific community says unequivocally that the world must reduce dependence on coal, oil, and natural gas to meet climate targets.
But the natural gas industry is trying not to fall behind the climate curve. Liquefied natural gas (LNG) exporters are promoting carbon-neutral LNG to buyers willing to pay a premium for emissions offsets. Industry proponents are also lobbying for gas to be added to green finance rules, which would open new sources of capital for gas projects.
However, neither strategy directly mitigates the harmful climate impacts of natural gas and LNG. Perfunctory attempts to paint these fuels “green” do not alleviate their climate or financial risks. Instead, natural gas and LNG are fundamentally unsustainable given their greenhouse gas (GHG)-intensive emissions profile and the deteriorating economics of gas relative to cleaner renewable energy sources.
Natural gas is more harmful to the climate than coal in many respects. Methane, the main component of natural gas, is a GHG with more than 80 times the heat-trapping capacity of carbon dioxide over a 20-year period. The production and transportation of natural gas can emit significant volumes of methane and other GHGs.
According to a recent study, GHG emissions “from the extraction, transport, liquefaction, and re-gasification of LNG can be almost equal to the emissions produced from the actual burning of the gas.”
Moreover, the International Energy Agency (IEA) recently found that global methane emissions from the energy sector are 70 per cent higher than official reports.
Greenhouse gas emissions profile of US LNG to Asia. Image: IEEFA
Since 2019, about 35 carbon-neutral LNG cargoes have been delivered to buyers in Europe and Asia, and the industry envisions the product becoming “mainstream.”
However, there is little consensus on the credibility of offsets in reducing emissions. Moreover, carbon-neutral LNG deals rarely disclose information about the total emissions of each LNG cargo, where offsets are sourced, whether offsets are for carbon removal or avoidance, or whether the buyer or seller pays for them.
This lack of transparency makes it impossible to know whether “green” cargoes have real climate benefits.
The few carbon-neutral LNG deals that disclose the actual emissions of each cargo have relied on a UK government standard of 250,000 metric tons of CO2 equivalent (mtCO2e) per shipment, without undertaking more detailed assessments. Cursory emissions estimates suggest industry players are making little effort to mitigate the climate impacts of their product accurately.
These estimates determine how many offsets are purchased and therefore directly impact the economics of LNG. LNG spot prices in Asia averaged US$16.40/MMBtu in 2021, meaning a typical 70,000mt cargo cost US$59.7 million. Offsetting 250,000mtCO2e at recent voluntary carbon credit prices could add US$2.2-3.5 million to this price tag, or roughly US$0.60-0.95/MMBtu.
Moreover, voluntary carbon markets—where offsets for carbon-neutral LNG are typically sourced—are growing rapidly. Forecasts indicate prices could rise to $20-50/mtCO2e by 2030, potentially adding US$5-12 million to the final cost of each LNG cargo, and raising per-unit costs by US$1.4-3.4/MMBtu.
For many current and prospective buyers, LNG is already a volatile, foreign currency-denominated fuel that can threaten macroeconomic and financial stability.
This is particularly true in the wake of Russia’s invasion of Ukraine, which caused LNG prices in Asia to jump to a record US$59/MMBtu. Adding a multi-million-dollar premium for dubious claims about carbon neutrality, therefore, makes the economic case for LNG even more far-fetched, especially when compared to the declining costs of clean renewable energy technologies. 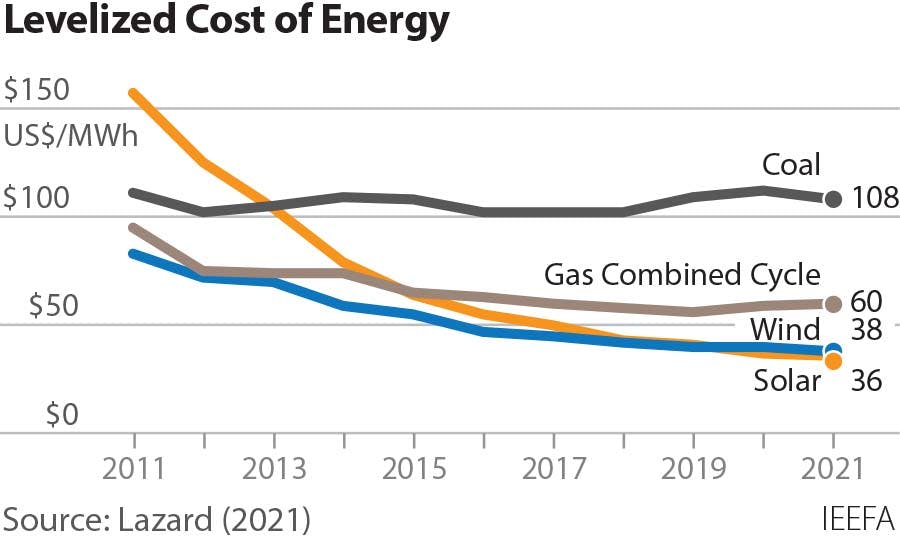 The levellised cost of energy of coal, gas combined cycle, wind and solar. Image: IEEFA
The lack of transparency and credibility in achieving “carbon neutrality” creates a greenwashing risk that serious ESG investors want to avoid. Yet, debates are ongoing about whether gas and LNG projects should be recognised in green taxonomies, which specify activities that qualify for green finance.
In December 2021, the South Korean government confirmed that gas-fired power plants that emit less than a certain emissions threshold would be treated as temporarily green. Similarly, the European Commission published proposals recently, which, if adopted, would extend the green label to gas-related activities that meet specific emissions criteria.
Notably, these proposals offer little scientific rationale for gas as sustainable. Instead, they recognise gas as a transition fuel, implying that gas investments are fundamentally unsustainable. This is consistent with the IEA’s findings that global gas demand could peak in 2025 under a global net-zero scenario.
As such, green capital should not be deployed to finance gas or LNG projects, regardless of “green” claims. Financing of fossil fuel projects should be limited to non-labelled traditional debt market instruments.
By allowing gas developers to access “green” pools of capital, which typically come with lower borrowing costs, countries risk jeopardising their credibility on climate action and locking-in natural gas and LNG infrastructure for the long term.
The industry push for gas to be recognised as “green” indicates that gas corporations can see into their shrinking future. Natural gas and LNG investments are fundamentally unsustainable in climate change mitigation pathways and in light of cleaner, more economically viable renewable energy alternatives.
Christina Ng is Research & Stakeholder Engagement Leader, Debt Markets, IEEFA. Sam Reynolds is Energy Finance Analyst, IEEFA.
We have a team of journalists dedicated to providing independent, well-researched stories from around the region on the topics that matter to you. Consider supporting our brand of purposeful journalism with a donation and keep Eco-Business free for all to read. Thank you.